MorphMarket's two-way rating system enables both buyers and sellers to build a reputation that gives confidence to those doing business with them.

The system is based on transactions confirmed by both parties through our inquiry system. Our format focuses on being brief and to the point and excludes third party opinions, but we allow allow linking to more lengthy investigations in other forums. We also have protections in place to guard against fake reviews.

You should always do your research before conducting business with another party on the internet. Our ratings system should be a first step in that process. For more ideas on researching sellers, check out our guide.

A seller's rating page can be reached by clicking on the rating field near the top of their store page. To find a seller's store page, look for the link on one of their ads. Alternately, all member stores as well as stores in developing categories can be located in the Seller Directory. Sellers can easily access their own rating page via the menu bar. 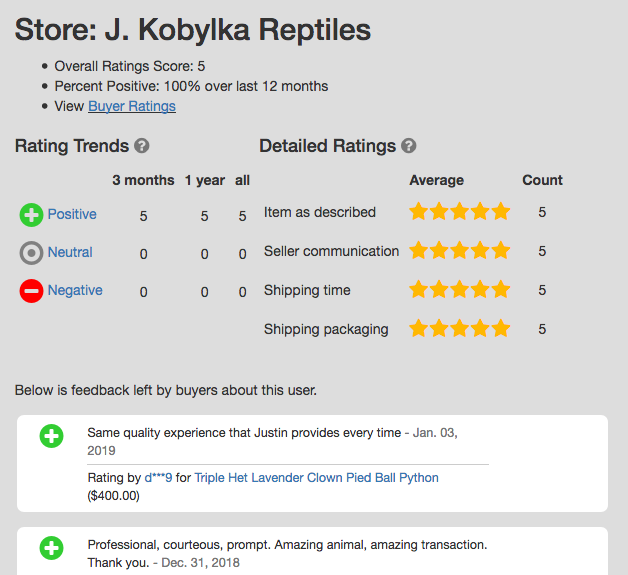 The top of the ratings page shows a variety of data:

The second half of the page shows a list of all ratings and feedback. Feedback are categorized by whether this user was the buyer or seller and whether it was feedback given or received. Only one or two of these tabs may be visible.

Buyers can accumulate ratings as well. This allows them to build up a reputation which will earn trust and respect with sellers and cause the ratings that they leave for sellers to carry more weight. This makes the buyer more valuable to sellers.

A buyer's user profile is only visible to sellers to whom the buyer has sent an inquiry. The user profile includes a variety of information about the user which they choose to include, along with their Overall Rating score. 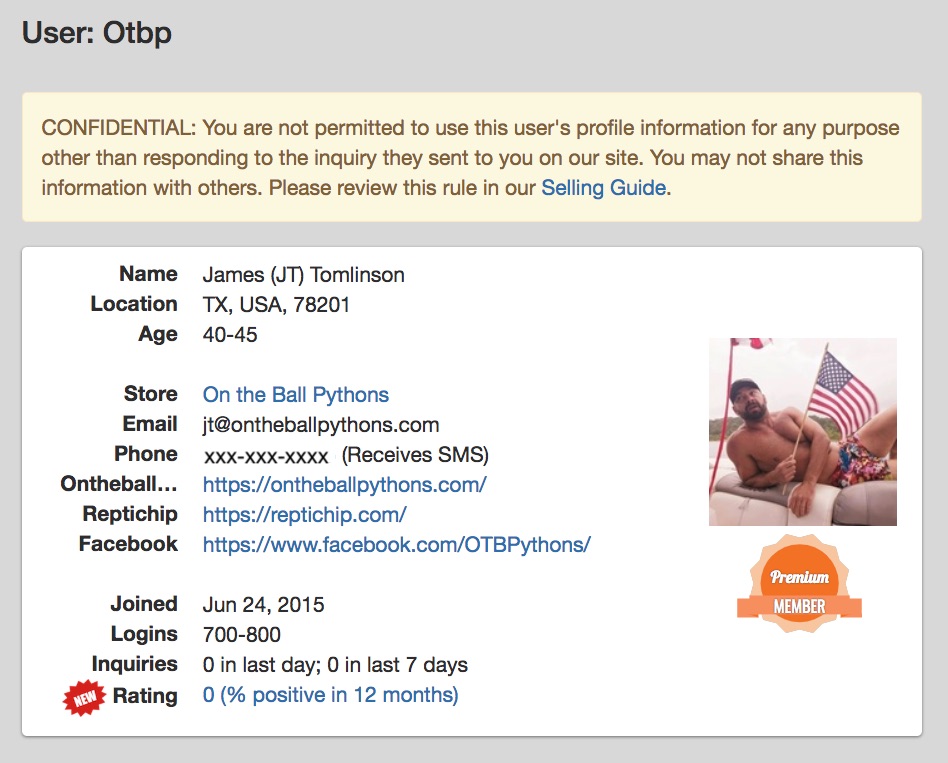 Sellers who are members of MorphMarket can click this link to visit the buyer's ratings page. The user rating page is not as detailed as the one for a seller, but it does include similar information. Buyers can easily access their own rating page via the menu bar.

The top of the ratings page shows a variety of data:

The second half of the page shows a list of all ratings and feedback left for other sellers.

MorphMarket allows buyers and sellers to leave ratings and feedback about inquiries that led to transactions. A transaction is simply the complete payment and delivery of an item or refund. Transactions that did not begin with a MorphMarket inquiry are not eligible for ratings on our site.

After payment has been made in full and the item delivered, users may leave a rating. Ratings are also permitted in some cases after any money changes hands.

Typically, the seller will initiate the rating process by marking an item as sold to a user. There are several places this can be done:

Any of these will trigger a notification email to the buyer with a link to leave a rating. The same link will then also be found on either party's own ratings page in the appropriate tab.

Alternatively, the buyer can initiate the rating process on the Messages Page by clicking the reply button then the "Rate This" button as pictured below. 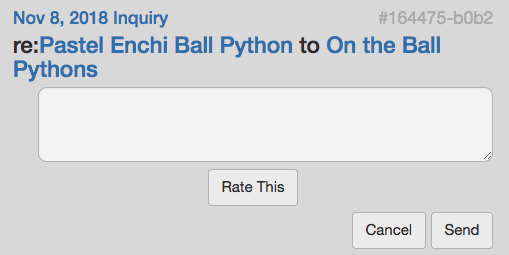 Ratings are not made public until the transaction is confirmed in either of the following ways:

Both parties have up to 60 days to dispute that the transaction occurred. Read more about Disputes below.

Ratings for the most part cannot be changed, so make the most of this opportunity by first:

Things to keep in mind about writing the most convincing feedback in the comment section: Finally, avoid including content that could cause your feedback to be removed as explained in the Moderated Content section below.

After the initial ratings, the buyer can still make two additions: 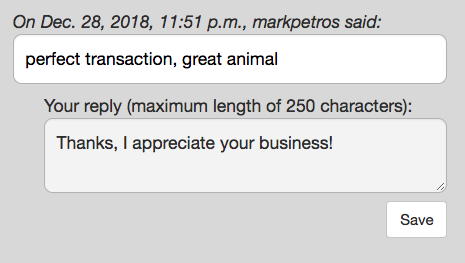 Linking to a Forum

Our rating system accepts a limited amount of information by design. If you wish to provide additional detail, we recommend taking your dispute to a forum. This will allow you to engage the other party in public with detailed comments, photos and screenshots, and involvement from the community.

Each party is allowed to provide one link to a forum discussion about this particular transaction. You can add the link after you have created the initial rating. You cannot change or remove the link once you have added it. Links not about this transaction can be disputed and will be removed, possibly along with your entire rating.

We currently support links to the following forums. You will need a free account to post there, and take care to follow all of their rules. After creating your post, copy and paste your discussion/thread link from your browser into the appropriate field on the rating.

A key part of MorphMarket's rating system is that it is based around confirmed transactions. For this reason we allow the non-rating party to dispute the transaction up to 60 days after the initial rating. To initiate a dispute, click the 'Dispute' button on the rating page in question.

A dispute event will result in the rating party being asked to provide evidence of the transaction within 3 days. During this time, the rating will be taken offline until a decision has been reached by MorphMarket to either accept or reject it.

If asked to provide evidence, the user should email [email protected] with documentation showing that the transaction took place. Documentation should establish facts such as:

To reach a determination, MorphMarket will consider submitted evidence as well as the prior history of both accounts.

Because we take the quality of our ratings system seriously, there will be consequences for those who falsely assert or falsely dispute transactions. Lost disputes may be shown on a user's ratings page and additional disciplinary actions may be exercised, including permanent ban from MorphMarket.

While we work hard to limit ratings to actual transactions, MorphMarket has no way to confirm every detail in each feedback comment.

MorphMarket reserves the right to remove any feedback; however, there are a few specific situations which may be reported using the Dispute button:

In all other situations, the party being rated is given the opportunity to reply with their side of the story. A seller may reply to each and every comment made by the buyer, as well as add a link to a forum discussion with more details.

Contested ratings should be always interpreted in light of the credibility of those individuals as demonstrated through their previously accumulated ratings. True character is only proven over time.

Any attempt to create fake ratings to improve or harm a reputation will result in disciplinary actions up to a permanent ban from MorphMarket. This includes but is not limited to the use of multiple accounts either independently or in collusion with others. While these attempts are rare, ratings are closely monitored and authenticity is strictly enforced.

Even the appearance of a seller creating a rating for themselves can result in a permanent ban from our site. So think twice before you try anything that might look sketchy, such as having "your mom" create an account and leave you a rating (yes, this actually happened).

Our system is designed to promote only authentic ratings. To accomplish this we use an algorithm which selects which ratings will be made public and how they will affect users' rating scores. This takes into consideration many factors about:

Identifying authentic ratings is a difficult problem which requires a conservative approach. As a result, sometimes legitimate ratings will not be promoted immediately, especially from users with less account history. These "reserved" ratings remain on record and can be accessed by the system and MorphMarket staff. The system is constantly learning and making adjustments, and reserved ratings may be promoted to public visibility in the future.

Initially we allowed sellers to opt out of our ratings system, however, we no longer allow this option. We now require full transparency. Usage of this feature has always been a terrible look for a seller. It's better to have a few negative ratings with professional responses than to hide them all-together. Sellers who are in good standing may choose to deactivate their account by contacing support.