Genetic level studies have proven that this is NOT tyrosinase-negative so technically it is not actually amelanistic. [1]

The gene that is mutated in this morph is the oca2 gene not the tyr gene. The tyr gene codes for the tyrosinase enzyme that is absolutely essential for the synthesis of melanin. The oca2 gene (formerly, P-gene for “pink-eyed dilution”) codes for a melanocyte-specific transporter protein. A mutation that renders oca2 non-functional prevents melanin from being properly transported into the melanocyte. [2]

Amelanistic corns visually lack all melanin, the pigment that is responsible for blacks, browns, and grays. An amelanistic corn will be shades of orange, red, yellow, and white. The intensity and amount of those colors can vary significantly, but will never include any black, brown, or gray colors.

No known genetic issues with amelanistic corns. However, because they lack melanin in their eyes, it may be best to limit the amount of harsh light and UVB they are exposed to.

Amelanism was the first mutation discovered in corn snakes.

The head pattern of an amelanistic corn will follow the typical corn snake head pattern, usually a V-shape on the top of the head behind the eyes, and band across the nose. Other head patterns are possible as well. Colors will remain consistent with the body colors. The eyes and pupils will be red. It’s very common to see a dark shape at the edge of the pupil in amelanistic corns - that is not melanin but is actually a part of the structure of the eye itself. Usually as the snake grows, it will develop yellow along the sides of the chin and neck.

The body of an amelanistic corn will range in shades of orange and red, with some yellow and white. Some can be very vibrant and others can be much more dull. No black, brown, or gray colors will be present anywhere on the snake.

Amelanistic corns will have a typical checker pattern on the belly, but instead of the normal black checkers, they will be either clear, yellow, or white, possibly with some red or orange bleeding into them.

The tail of an amelanistic corn will follow the body pattern and color.

There are a number of line bred amelanistic types of corn snakes.

Extreme reverse okeetee (shortened to ERO) is a reverse okeetee with even thicker borders. Some are so thick nearly the entire snake is white, with only limited amounts of orange in between the borders.

Candy Cane is a selectively bred amel that is red and white or orange and white. They should have very clean patterning and color, with little to no color mixed into the background color. Often candy canes are from Miami lines.

Sunglow is a selectively bred amel that has enhanced color vibrancy and no (or very little) white borders around the saddles.

Fluorescent is a selectively bred amel that has very bright and clean colors, usually orange. It often gets paired with reverse okeetee, creating a very bright orange snake with thick white borders.

Creamsicle is an amel hybrid between a corn snake and an emoryi rat snake. Like all amel types, they lack all melanin, but they are usually much more of a creamy orange color than a pure amel.

High white is sometimes combined with reverse okeetee to make a snake with thick borders and a white background color.

Ultra is somewhat related to amel in corns because they sit at the same locus. It’s a rat snake gene, brought over by interbreeding. When bred with amel, they can produce ultramel (het amel and het ultra). 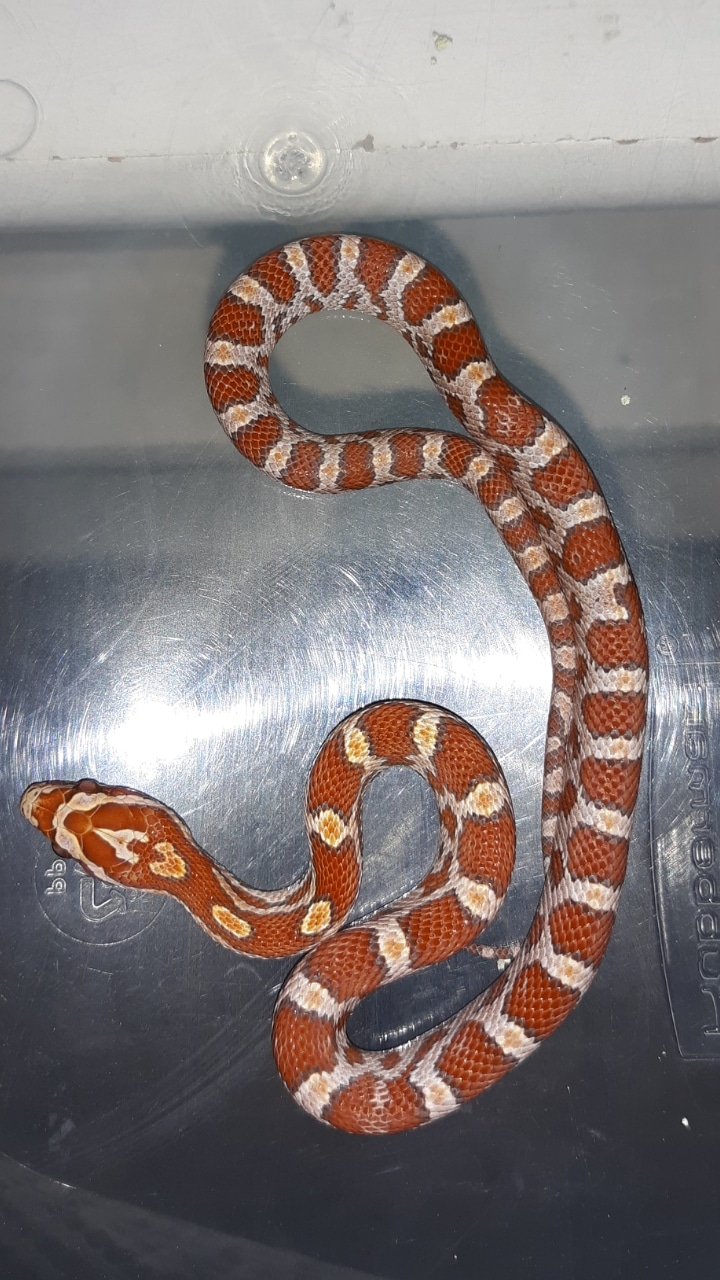 My hybrid collection
https://www.nature.com/articles/srep17118
Contribute to This Article