Eclipse is a recessive mutation.

An interesting mutation first released in combination with albinism and a few other traits as the Raptor Leopard Gecko, caused quite a stir. For good reason, as it creates a unique solid but transparent colored eye - in which the pupil and iris cannot be distinguished! Albino specimens can have unique solid transparent red eyes. Sadly, it has also created a ton of confusion! Since initially released in the form of the bright orange nearly solid patterned albinos (Raptor), many have come to believe this eye trait to be synonymous with “Raptor”. It is not, it is a separate allelic mutation, just one component of a Raptor. To properly be a Raptor, a gecko must possess this mutation, but it is important to understand that Eclipse can be present in non-Raptors and can be combined with other mutations. Thus we can produce a completely solid black-eyed Normal Leopard Gecko, for example. [1]

The word Eclipse refers to an eye trait where the eye is completely covered. [2]

Eclipse-eyed geckos present another unique problem in terminology. This is a simple recessive trait, with specimens heterozygous for Eclipse possessing completely normal eyes. However, not all specimens homozygous for it will actually display the unique solid eye appearance. Some will have only half the eye colored (these are termed snake-eyed) while still others may have completely normal appearing eyes. To really complicate things, they may start out solid at hatching, later changing to “snake-eyed” or even normal! [3]

Eclipses also have white patches around their their mouths.

The belly is unaffected by this trait.

Eclipses have black speckles along their tails.

Just after the Eclipse-eyed Raptors were released, a gecko combining Albinism and Blizzard, and displaying the unique solid-red eyes of the Eclipse trait was produced. It was created from back-crosses of geckos produced from breedings of Raptors and Blazing Blizzards. Most specimens grow to adulthood displaying the same creamy white coloration as the Blazing Blizzards used to make. Simply put, they are Eclipse-eyed Blazing Blizzards. Named the “Diablo Blanco” and marketed in Ron Tremper’s uniquely flamboyant style, they created a huge interest. Immediately, customers began inquiring about Blizzard and Blazing Blizzard Leopard Geckos they had either seen elsewhere or had purchased from us which had the same appearance in eyes as “snake-eyed” Eclipse specimens. All were hoping they had inadvertently acquired what was needed to quickly and inexpensively produce Diablo Blancos.

To tell the truth, while I’d noticed that “snake-eyed” look once or twice in our Blizzard/Blazing Blizzard lines, I’d never really cared about it. Honestly, I didn’t know how to answer their inquiries, as I was not even certain I’d ever paired two specimens showing the trait. So I dutifully dug through all our colonies, picked out all the “snake-eyed” looking ones and tossed them all in two boxes. One box with the best looking “snake-eyed” male Blazing Blizzard from our lines as harem-master. And one with a splendid solid-eyed Raptor as the stud. No solid eyed Eclipse specimens have ever been produced from them. So, the answer is no, it’s not the same trait. Apparently Blizzards can display this “snake-eyed” look without use of the Eclipse allele. Obviously, Blizzards can also be produced using the Eclipse eye trait, and these can display any of the three types of eye appearance described in the Eclipse section above. Due to their ability to appear “snake-eyed” by either method, such specimens may yield unexpected results when bred together! Only specimens from such projects with complete solid eyes can be readily identified as Homozygous for Eclipse. [4]

Blue Spot Eclipse - this is selectively line bred for higher blues of the head that remains into adulthood. 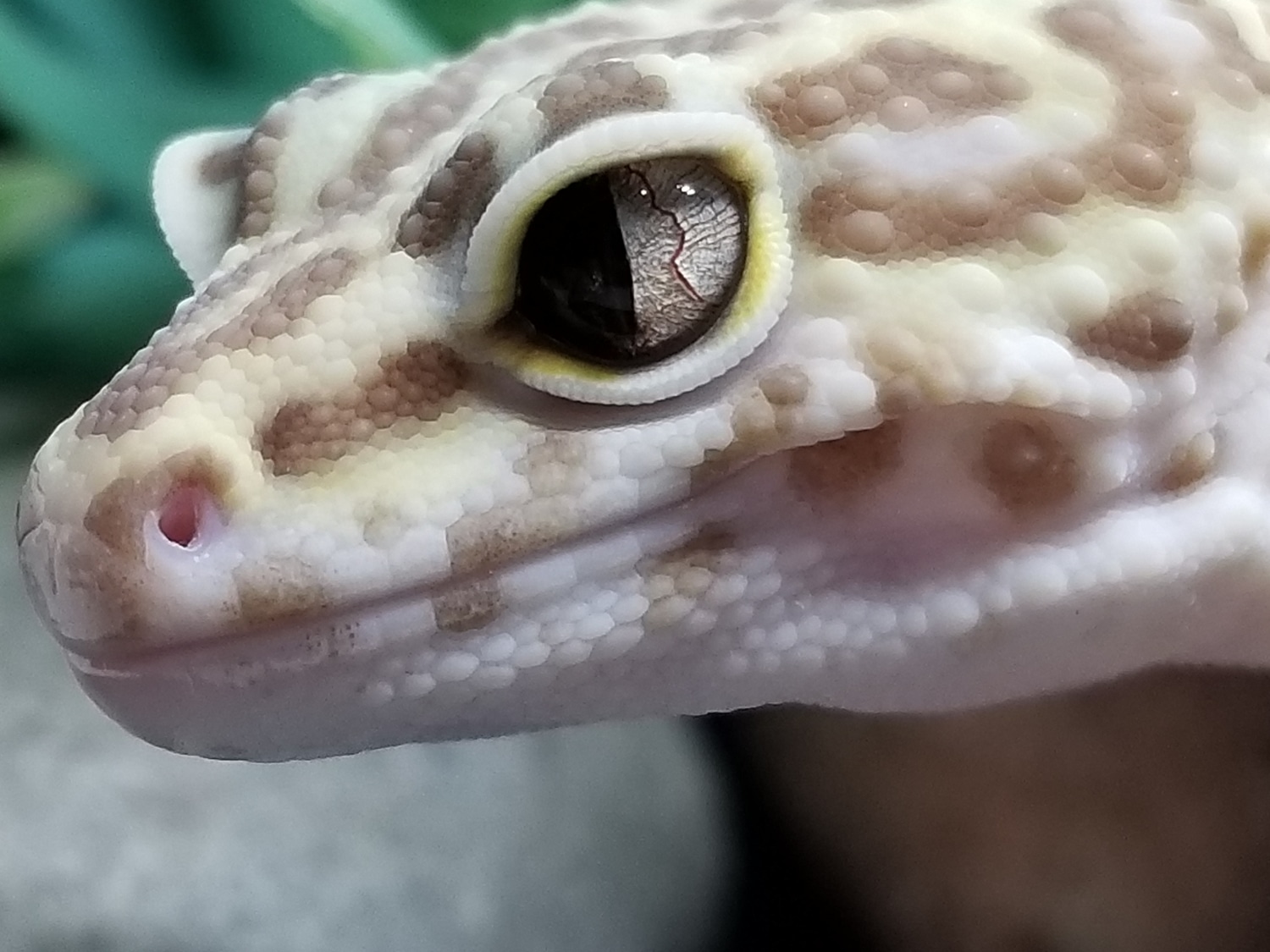 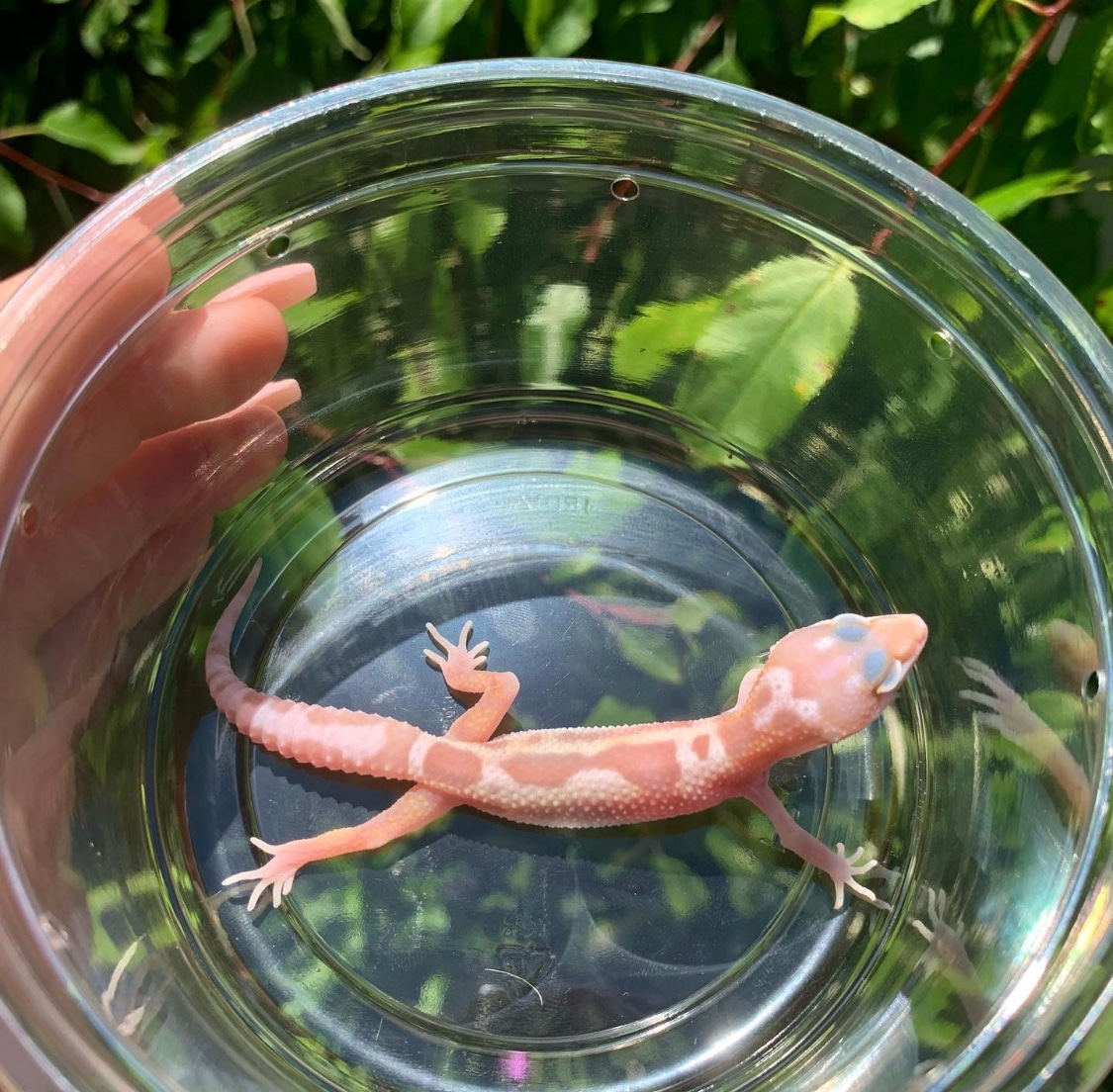