The Albino Reticulated Python is possibly one of the most notable morphs in the reptile hobby. Albinos are amelanistic, taking all dark pigmentation and leaving bright yellows, sharp whites and a outlineless pattern. Bob Clark Reptiles proved the Albino as the first recessive Reticulated Python morph.

While the word photophobia literally translates to a "fear of light”. Its not actually that you are scared of light, but instead, are incredibly sensitive to it. Animals with albinism experience photophobia due to the lack of pigment in the iris, which does not allow the eyes to filter out light.

During April of 1993, I imported a male amelanistic reticulated python from Malaysia. In this snake, the gold pattern is replaced with bright lemon yellow, the gray areas with white, sometimes with a yellow wash, and the black areas with an almost translucent lavender color. The snake was wild caught when it was about 9 feet long, and it remains so two years later, due largely to the fact that it refused to feed voluntarily for almost exactly two years. In late April of 1995, the snake started feeding voraciously and now rarely refuses a meal. In spite of the snake’s difficult acclimation and its small size, it was observed breeding last spring, even though at that time it had still refused to feed. Heterozygous offspring were produced this year. I hope this morph will be available in the near future.

There is an incredible diversity of colors and patterns in normal wild type pythons. Some purists may frown on the popularity of the captive-propagated variants, believing that these animals are unnatural and somehow less worthy of their attention. If we consider the rest of the animals we keep as pets, indeed all of the organisms that have been associated with humans through history, the production of python color and pattern morphs is typical. There has always been the selection of desirable traits. Consider tropical fish, cage birds, orchids and agriculturally important plants and animals. Few would agree that a chicken with less meat and laying ability is more desirable because it more closely resembles its wild ancestor. The differences in goldfish and carp, and my dog and a wolf are both generally appreciated by the pet-keeping public and people in general. The future almost certainly will give us new python morphs and increased availability of existing ones. I, for one, am excited about the possibilities. [2]

The head of the Albino (Purple Phase) reticulated python is usually completely covered in a faded orange/yellow, apart from the deep purple line down the dead center. Their eyes are usually a reddish orange with a red pupil.

The body of the Albino (Purple Phase) has normal diamond patterning, but the usually dark elements are full of intense oranges and deep yellows, much like the White Phase, but with the whites being swapped out for lilac pigmentation.

The tail of the Albino (Purple Phase) follows the same colouration as the rest of the body. 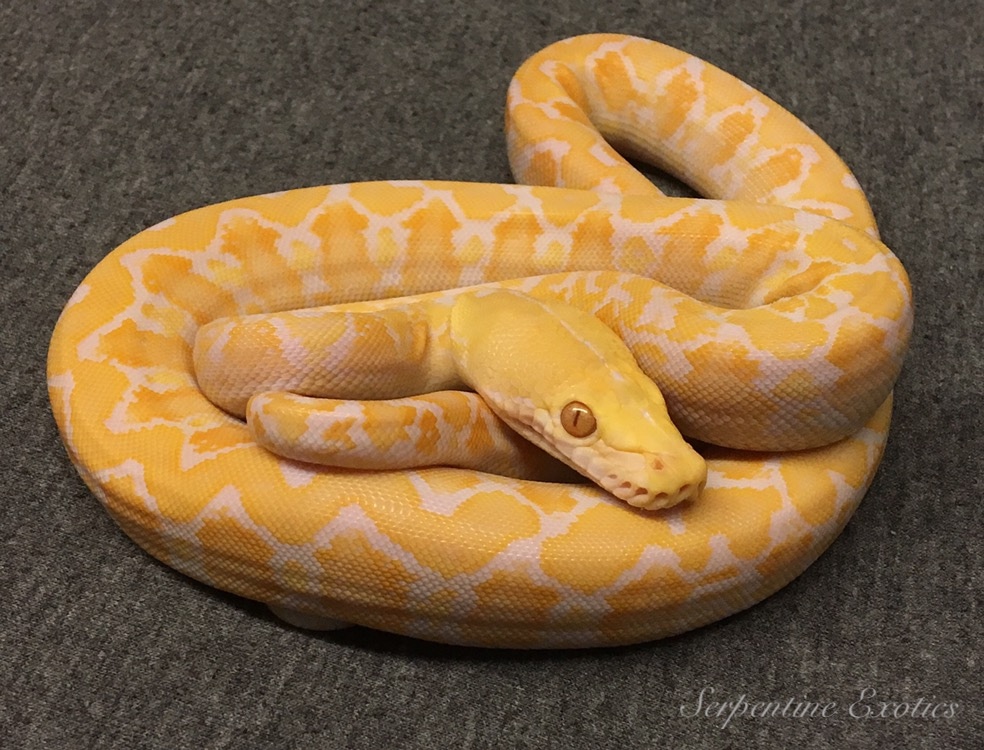 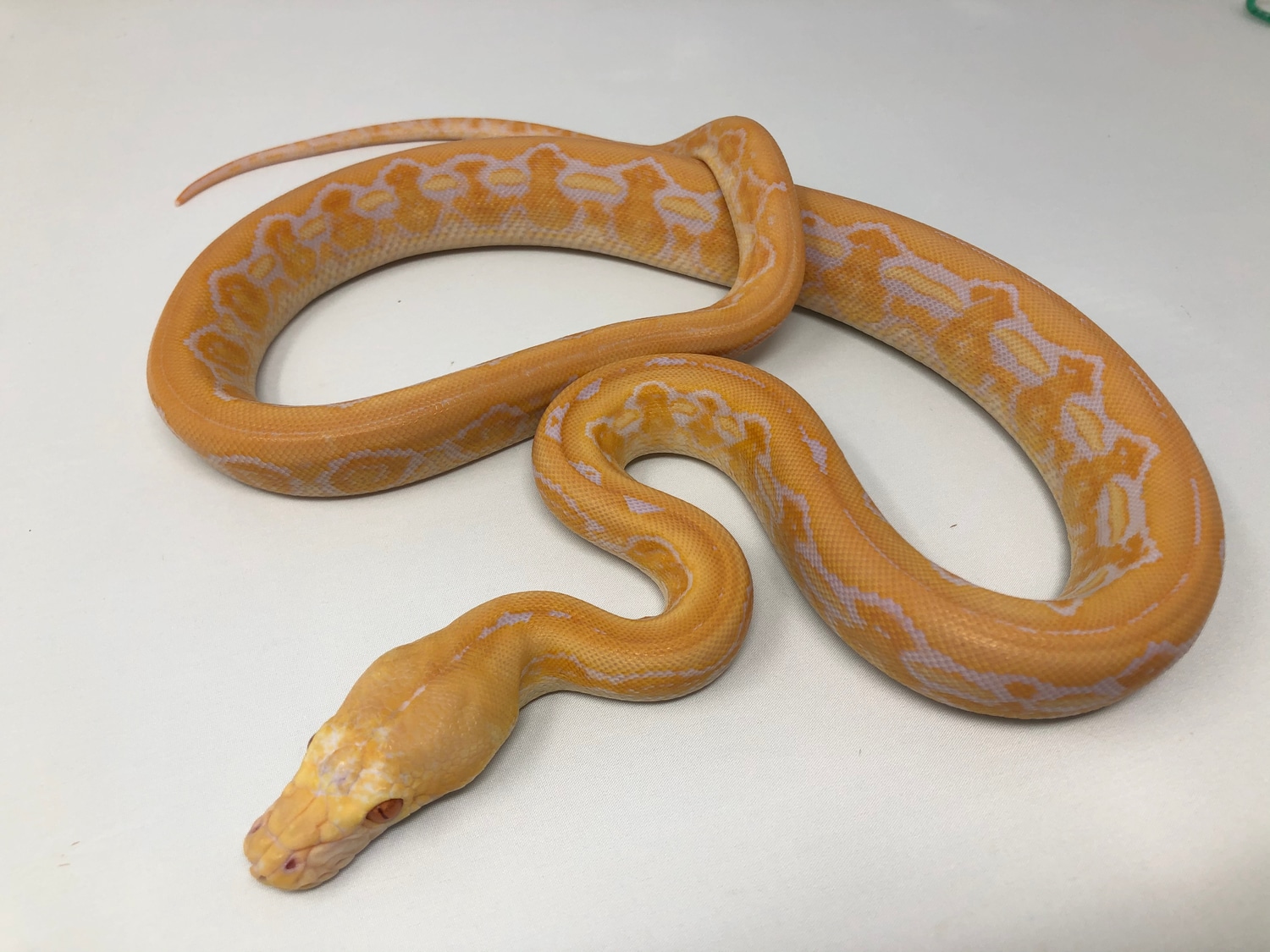 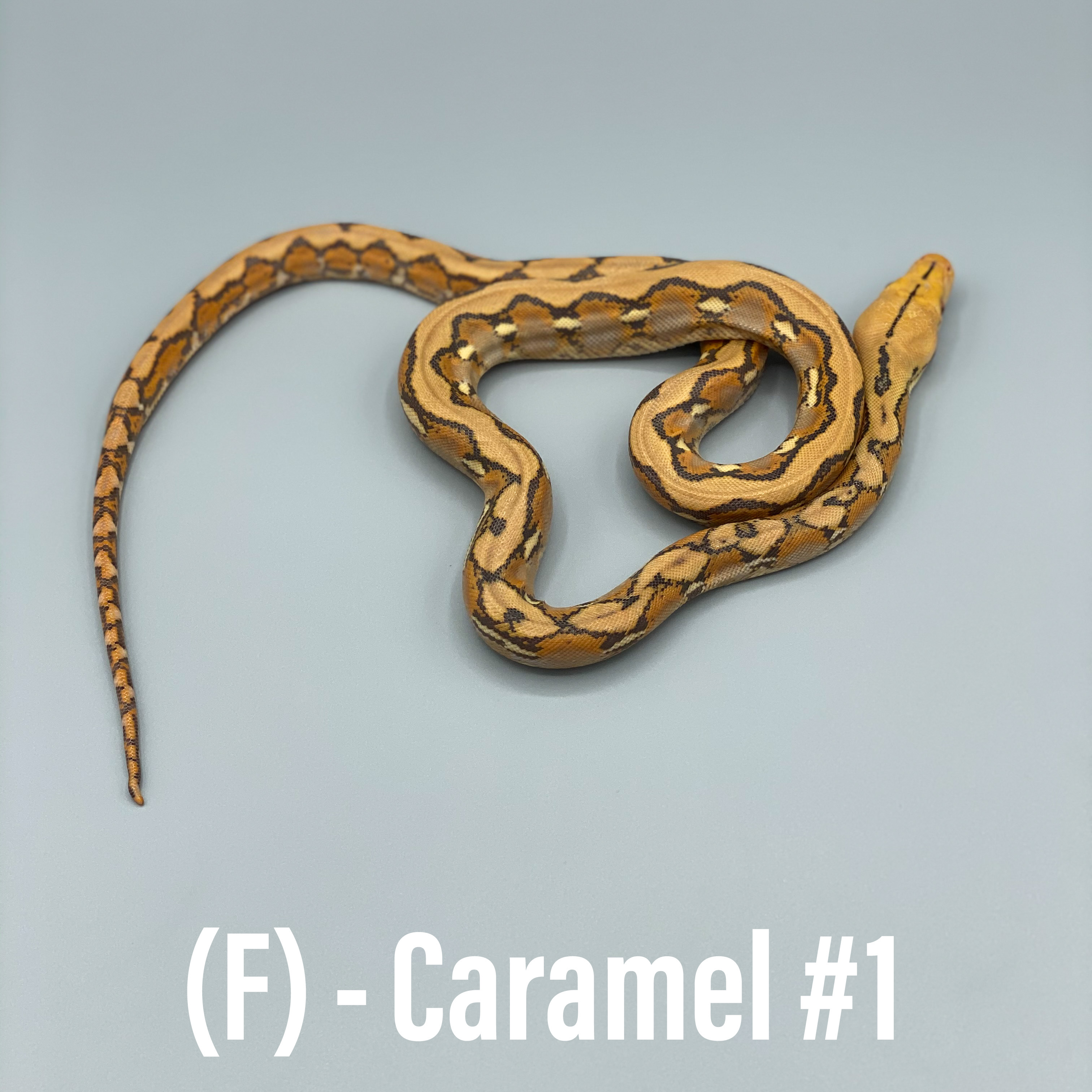