The Wrecking Ball Ball Python is an Incomplete Dominant trait. The single gene Wrecking Ball has a extremely unique wobbly/melted pattern and was originally believed to be connected in some way to the Piebald mutation. However, through extensive breeding by Mary and Grant Hubbard, this has been proven not to be the case.

This is a project Grant and Mary Hubbard of Wreck Room Snakes had been working on for around 9 years or so to prove out.

The original Wrecking Ball was purchased a long time ago as a female “wild fancy import”. They really liked the way her pattern was kind of melty looking and the lack of alien heads, so they took a chance on her.

They bred her the first time to a yellowbelly brite (fire) and got a male that kind of had the same melty looking pattern as mom, so they held him back. Then they tried her with a Potion to see if what, if anything, would come out of that. They didn’t really see anything that resembled mom out of that clutch.

The male from the first pairing was a breedable size the next season, so Grant and Mary bred son back to mom and got some interesting results. Two that had a very strong melted pattern like mom, as well as a crazy orange pied thing. The following season they tried to pair mom again with her son to see if they could get more pieds, but she decided she did not want to give them any more eggs for the next two years.

The guys at Wreck Room Snakes weren’t getting their hopes up this year that she was going to give them eggs, but they decided to try the weird orange pied that she had produced to see what would happen. The result was five very orange crazy pieds and three more that were like mom, but more extreme. They spent the following year hoping to find out if this is a new line of pied or if it is compatible with the existing lines of pied.

In June 2019, they hatched a clutch from one of the male “Piebalds” x a unrelated line of Piebald and produced a bunch of visual Piebalds, leading to the belief that the Wrecking Ball was somehow compatible with the existing lines of Piebald. [2]

Throughout the next two years’ breeding seasons, Wreck Room Snakes discovered that the original Wrecking Ball was, in fact, heterozygous for Piebald and out of pure crazy odds they had been pairing het offspring back to each other, which was resulting in the visual Piebalds.

This revelation meant that Wreck Room Snakes had not only discovered a new genetic trait in the Wrecking Ball, but also a completely new bloodline of Piebald (Wreck Room Line).

The head of the Wrecking Ball tends to have a light diamond-shaped headstamp.

The body of the Wrecking Ball Ball Python is covered in melted looking alien heads with very few eyes/keyholes within. The overall colour palette is much brighter than that of a Normal Ball Python.

The tail of the Wrecking Ball Ball Python follows the melted looking pattern. 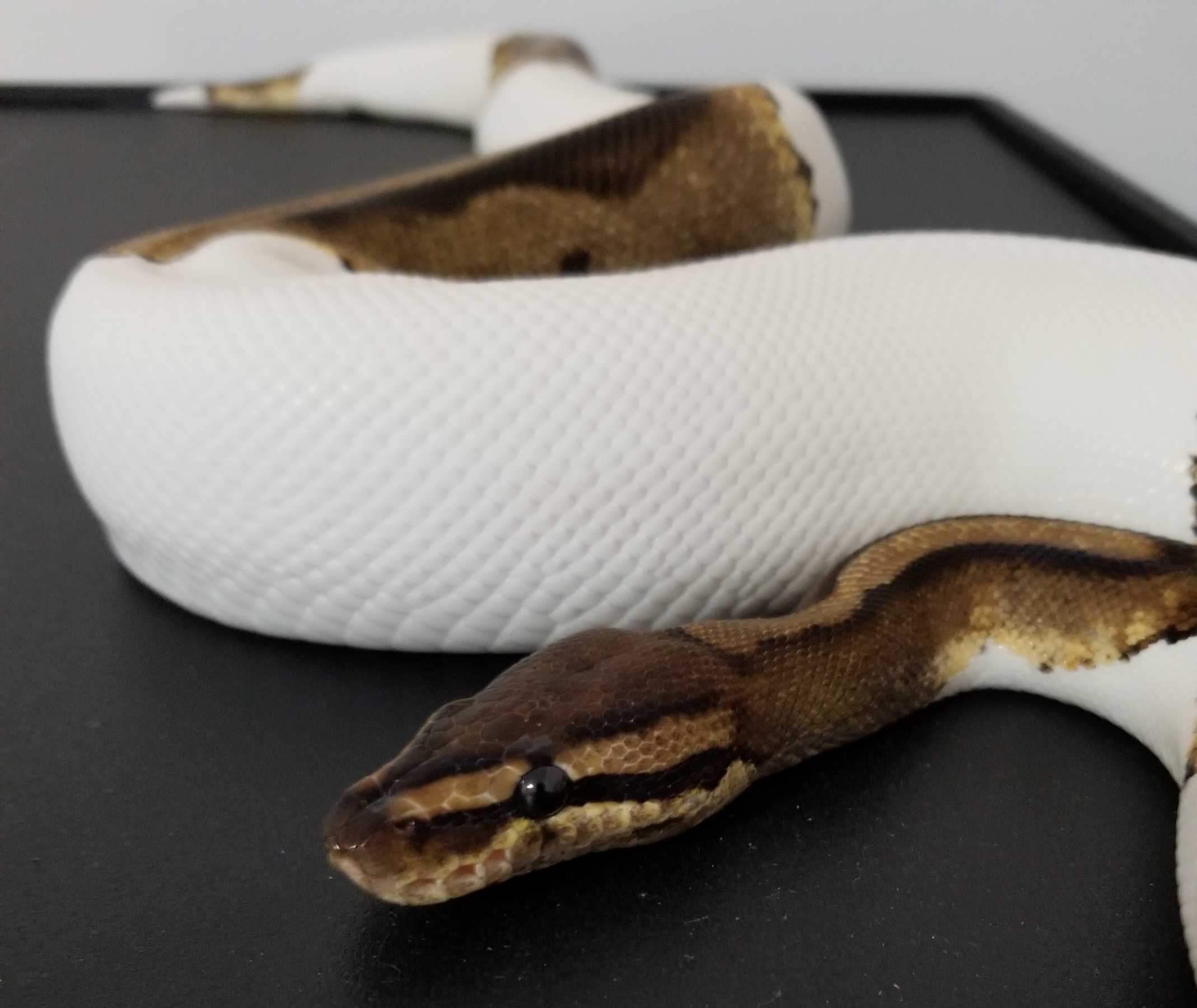