The Albino Ball Python is possibly one of the most notable morphs in the reptile hobby. Albinos are amelanistic, taking all dark pigmentation and leaving bright yellows, sharp whites and a outlineless pattern. Bob Clark Reptiles proved the Albino as the first recessive Ball Python morph.

The Albino mutation (officially known as tyrosinase-negative albinism), is a recessive color mutation that causes a total lack of melanin pigment in the skin and eyes. They are also referred to as T- albino, common-albino or amelanistic. [2]

Albino, Toffee, and Candy color morphs are caused by variants in the gene TYR. This gene encodes an enzyme called tyrosinase.

While the word photophobia literally translates to a "fear of light”. Its not actually that you are scared of light, but instead, are incredibly sensitive to it. Animals with albinism experience photophobia due to the lack of pigment in the iris, which does not allow the eyes to filter out light.

Bob Clark - "In 1989, I became aware of the possibility of the existence of an amelanistic ball python (Python regius). My friend Olaf Pronk, then of The Hague, Netherlands, had received word via Telex, that the snake had been captured in Ghana. I had heard this type of rumor before, and in every case the snake apparently did not exist. We obtained a picture of this animal and started negotiations to acquire it. In May of that year, I received the snake, a young male about 26 inches long. It was bright lemon yellow and clean white. The snake’s high contrast, bright color and small adult size created much interest and anticipation among the snake-buying public. The young albino was imported as a nonfeeding, wild-caught individual with all the associated problems and worry that go with such an animal-especially a ball python.

The snake fed voluntarily in due time, and while it was thought to be too small to breed, it did so that fall. The heterozygous generation hatched in the spring of 1990. These snakes grew quickly, bred and laid eggs that hatched when they themselves were only 2 years old. I remember clearly the morning during May of 1992. I checked the maternally incubated clutch to find the female coiled loosely around the eggs, exposing one egg with a pink and yellow head protruding. Two years of anticipation had ended! I was fortunate to avoid any jubilation-related injury to myself in the short private celebration that followed-it was a very good day. Expensive and desirable, these snakes have held their price at $7,500.

On the night of August 18, 1994, my breeding facility was burglarized, and the majority of my colony of these animals were stolen. The thieves took the founding male albino and a group of heterozygous females each incubating eggs. Some of the eggs were due to hatch in a matter of days. In spite of the loss, I still maintain a small viable breeding group of albino ball pythons." [4]

A bright yellow crown sits on top of the Albinos head, stripes cross both through and under the bright red eyes caused by amelanism.

The belly of a Albino is usually completely glossy white with no spotting or smudges. The “alien head” pattern from the sides can be seen fading as the scales meet.

As with the Normal Ball Python, Albinos tails tend to come to an end with a thin stripe or beads of pattern.

There is a lot of variation among the shades of yellow in albinos due to varying natural patterns among ball pythons. Through selective breeding, some breeder’s lines are recognized as faded, yellow headed or as high contrast.

All lines of T- albino seem to be compatible. [6]

Ball python breeders consider Albino, Toffee, and Candy to be different alleles of the same gene. Is this idea true? Yes and no. Yes, these morphs are all caused by variants in the same gene (the gene TYR). But no, these morphs do not necessarily correspond to different molecular alleles. The ‘Toffee’ and ‘Candy’ morphs appear to be caused by the same allele. We hypothesize that this morph was discovered twice and named ‘Toffee’ by one person and ‘Candy’ by another person. In addition, the morph described as ‘Albino’ is actually made of up two different molecular alleles. Some Albinos carry one allele; some Albinos carry the other allele; and some Albinos carry one copy of each allele. We hypothesize that the two alleles making up the ‘Albino’ morph produce similar color patterns and were not previously recognized by breeders as distinct. [7] 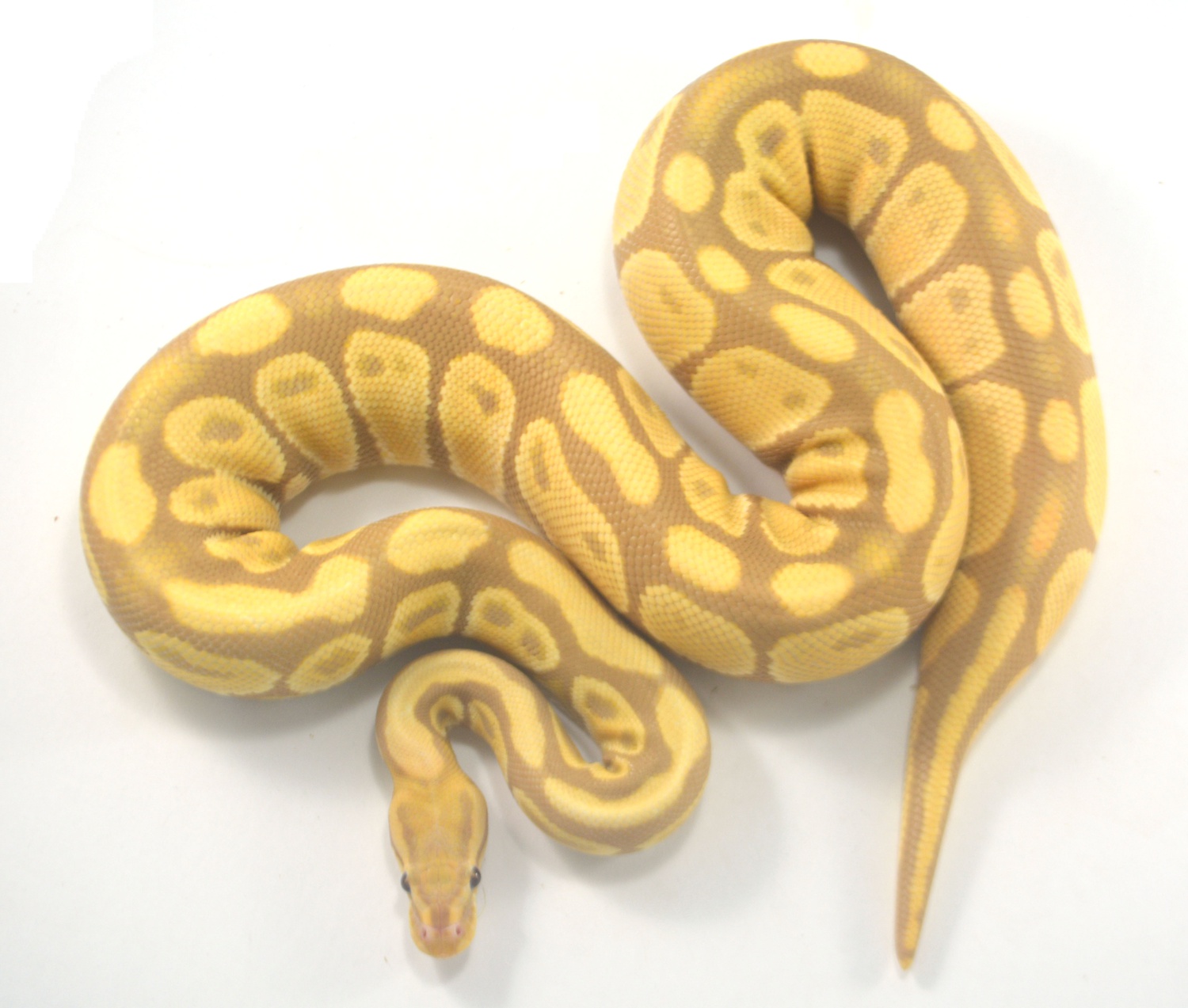